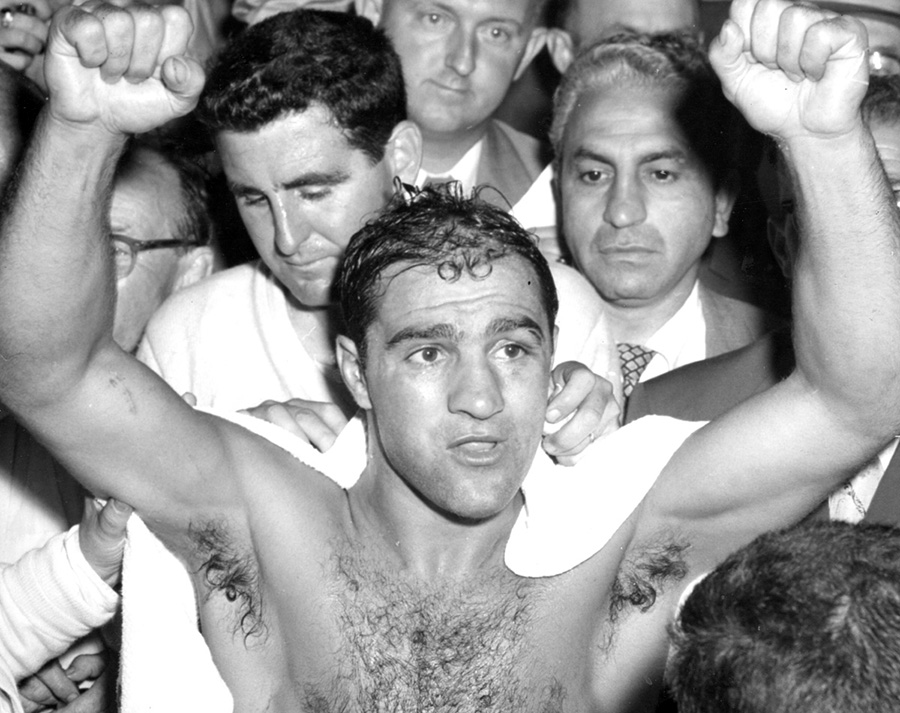 Rocky Marciano was born Rocco Francis Marchegiano, on September 1, 1923, in Brockton, Massachusetts. During his career, Marciano held the heavyweight boxing title for four years in the 1950s, and he is the only boxing champion to ever retire undefeated.

His father, Pierino, worked at a shoe factory. His mother’s name was Pasqualena, and Rocky would spend much of his life making sure she didn’t have to live in the poverty that Rocky knew growing up. Marciano was a typical American kid, playing baseball and football and dreaming of a professional career in one of those sports. He didn’t take up boxing until after 1943, when he was drafted into the Army. He took up the sport mainly as a way to avoid KP (assisting the cooks) and other less desirable activities, but he showed a natural ability and fought as an amateur following his discharge in 1946.

In 1947, Marciano had a tryout with the Chicago Cubs as a catcher, but was let go because he couldn’t make the throw from home plate to second base with accuracy. It was the end of his baseball dreams, and the following year he turned professional in the ring. By the spring of 1949, his boxing skills had garnered some attention, as he knocked out his first 16 opponents. The quality of his opponents improved over the latter half of 1949 and 1950, but Marciano continued to beat challengers, knocking out most of them.

There were those who didn’t think much would become of the 190-pound heavyweight from Brockton in the early days. Goody Petronelli, noted fight trainer, caught one of his early fights and recalled for Sports Illustrated, “I never thought he’d make it. He was too old, almost 25. He was too short, he was too light. He had no reach. Rough and tough, but no finesse.” The hometown folks became believers, though, traveling in groups to Marciano’s fights in nearby Providence, Rhode Island, and yelling “Timmmmberrr” when Rocky had an opponent ready to go down.

Trainer Charley Goldman taught Marciano his trademark technique, which would serve him well as champion. On October 26, 1951, with 37 wins and 32 knockouts under his belt, Marciano faced his most formidable opponent in former heavyweight champion Joe Louis. Louis was past his prime, and when Marciano knocked him out in the eighth round, he had such mixed feelings at beating his hero that he cried in Louis’ dressing room after the fight. Sentiment aside, however, the fight established Marciano as one of the marquee fighters in the heavyweight division, and assured him of a title shot before too long.

Five fights later, on September 23, 1952, he got that chance. Jersey Joe Walcott was the defending champion and Marciano, the challenger, when the pair met in Philadelphia. Marciano pulled out a victory which would be remembered as typical of his tough-guy, never-say-die style: way behind in points and struggling offensively all night, he caught Walcott with a short, overhand right on the jaw in the 13th round which knocked him unconscious, giving Marciano the championship belt.

Marciano only defended the title six times, but some of those fights are considered classics by boxing fans. He knocked out Walcott in the first round of their rematch in 1953, then knocked out Roland La Starza later that year. He won a decision against Ezzard Charles in 1954, and almost lost his title in their rematch later that year. In the sixth round, Charles cut Marciano’s nose so badly his cornerman couldn’t stop the bleeding. With the ring doctor watching the cut closely and considering stopping the fight, Marciano erupted against Charles in the eighth round and knocked him out.

Marciano defended his title against Don Cockell in 1955, knocking him out despite organized crime enticements for Marciano to throw the fight. His last fight was September 21, 1955, his third Yankee Stadium defense. He knocked out Archie Moore in the ninth round. The unofficial attendance through closed-circuit television across the great cities of North America was over 400,000.

On April 27, 1956, Marciano retired from boxing at the age of 31. “I thought it was a mistake when Joe Louis tried a comeback,” the New York Times quoted him as saying. “No man can say what he will do in the future, but barring poverty, the ring has seen the last of me. I am comfortably fixed, and I am not afraid of the future.” He said he wanted to spend more time with his family.

Marciano spent the years following his retirement making money from personal appearances. On August 31, 1969, the day before his 46th birthday, he died in a private-plane crash near Des Moines, Iowa. He was survived by his wife of 19 years, Barbara, and their two children, Rocco Kevin and Mary Anne.

Although he may not rank in the top five boxers of all time in terms of skill, speed or power, Rocky Marciano was tough enough to compensate, and his fans recognized his grit. A sports writer commented that if all the heavyweight champions of all time were locked together in a room, Marciano would be the one to walk out.